The 10 best cities in Vietnam to visit

It can be said that no matter where you stop on this S-shaped land, you can still see interesting things around you. But, if you have to choose, what are the 10 best cities in Vietnam?

With diverse terrain, long coastlines, majestic mountains and suffocating rice fields, Vietnam is increasingly becoming an attractive destination on the world tourist map. The landscape changes from north to south, from spectacular to simple and idyllic. Six distinct cultural regions from the Red River Delta, Northwest, Viet Bac, Central Coast, Central Highlands to the Mekong River Delta all have a distinct appearances and are attractive in different ways.

However, what are the most attractive tourist cities in Vietnam and what are their attractions?

Recognized by UNESCO as a World Heritage Site in 1999 and one of the key tourist destinations of the country, Hoi An not only maintains a solid position on the world tourist map but also breaks through to the top. in the top position in the ranking of the best cities in the world in 2019 voted by the famous travel magazine Travel and Leisure.

Nestled among the surrounding modern cities, Hoi An keeps the ancient and mysterious focus but also blends a little freshness and appeal. Once a busy trading port between the 16th and 18th centuries, this small city was the intersection of the most prominent cultures of the time, a little Japanese, a little Chinese and a little Western. . Hoi An’s culinary style can also satisfy a variety of diners from Asia to Europe, but it does not lose the characteristics of Vietnamese cuisine.

Above all, the most attractive feature of Hoi An ancient town is the ancient architecture of the Chinese Hoa Ha region and the works of Indochina architecture. It is these unique features that have brought visitors to immerse themselves in the nostalgia of a glorious time. Local art products on sale along both sides of the road will also attract the eyes of visitors interested in local produce.

Read more: Hoi An tourism: 5 reasons to prove the beauty of this town that make TripAdvisor highly recommend

Once a peaceful fishing village, Mui Ne is now famous as an attractive destination for tourists in neighboring areas, especially Ho Chi Minh City. Although the number of tourists coming here is increasing day by day, the “sea paradise” still brings a comfortable and pleasant atmosphere of land in harmony from people to landscapes.

Mui Ne can satisfy even the best surfers with the winds that bring strong waves day and night. If you are tired of sports games on the sea, visitors can look at the golden sand dunes that always change into unpredictable shapes that make photography enthusiasts excited. Coming to Mui Ne, visitors also have the opportunity to wander with the beauty of Cham, drop themselves in graceful dresses and join the rhythm with lovely Cham boys and girls.

Originally inhabited by the inhabitants of the Upper region, Da Lat is the sound of the camp from Da Lach, the stream of the Lach people (Co Ho). The “foggy city” has a melancholy beauty full of the “sacred” nature of a highland. Located more than 1,500 meters above sea level, Da Lat is surrounded by cool temperatures all year round, the air will be as if spring will never end.

Discovered and chosen by the French as a place to be exploited to form a resort under the Governor General of Indochina, Da Lat dreamed of starting to show off its beauty and becoming an ideal destination for tourists every holiday and Tet. The waves of Western culture brought by France in a certain way blend with the rustic features of the ethnic groups here, giving the “land of thousands of flowers” a distinct romantic form.

Coming to Da Lat is to find peace in life, have quiet moments and look at yourself. In addition, with a diverse system of forests, hills, streams and rapids, this is also a place for personalities who are passionate about exploring and challenging nature.

Nha Trang is one of Vietnam’s outstanding tourist areas with proximity to beaches stretching along the coast, attractive and lively entertainment areas and sandy beaches rarely empty of people. The city rests on one side of the crescent-shaped coast, on the other side, the mountains and hills depict a picture of a beautiful landscape like ink.

Along the smooth sand is a park area adorned with sophisticated and delicate sculptures peeking out from behind the coconut trees. Visitors can also enjoy exploring the ocean with shuttle boat services to more than 20 surrounding islands, experience scuba diving services to see corals or explore marine life when coming to the Institute of Oceanography at the center. city ​​center.

The cuisine in the coastal town of Nha Trang will not disappoint visitors with countless fresh products from the sea. If you are still not satisfied with the natural scenery, the Po Nagar Cham tower, the spiritual symbol for the country, will fill the visitors’ interest in culture.

“Can Tho have white rice and clear water, whoever goes there doesn’t want to return?”. Charming on the gentle Hau Giang stream, Can Tho is accreted by fertile alluvium to cultivate a lush garden, suitable for a variety of crops.

As the intersection of major river gateways, Tay Do is also an ideal place for tourists to visit bustling floating markets, transporting large quantities of goods from the Mekong Delta to neighboring areas. Sailing the oars to the South, listening to the lamentable harp and enjoying some specialties of the river and feeling the warmth of the country people, you will feel how interesting it is to be a gardener.

Belonging to the land near the top of the country, Sapa town is the first choice for those who love the pristine mountain scenery. Clouds cover the way, hills follow one another, and people are also colorful. There is nothing better than sitting on a high mountain, holding a warm cup of tea, breathing in the thick morning air and silently watching the dawn gradually appear.

As a place with a large number of ethnic minorities, Sa Pa seduces visitors with the freshness and purity of the highland region, along with activities and festivals imbued with indigenous ethnic identity. Although it has changed more or less after the tourism development plans, remaining in this town is still the core of the original beauty, reflected in the handicrafts sold at traditional markets. system of near and far versions.

Read more: 8 reasons make Sapa be one of the best places to visit in Vietnam

Only about 120 km south of Ho Chi Minh City, the coastal city of Vung Tau is an attractive destination for domestic and foreign tourists if they want to avoid the summer heat. As a peninsula with a beautiful location, facing the sea on three sides, the city attracts the eye with its airy boulevards and colonial-era mansions.

Close to the beach is the road stretching from Front Beach to Back Beach filled with lovely restaurants and eateries in the sea style. Prominent against the northern sky of the city is the statue of Christ the Redeemer – a version based on the famous statue of the city of Rio de Janeiro. With the strict management of the city authorities, the beach today is still kept clean and beautiful even though the number of tourists coming to visit has become more crowded.

Formed on the old isle built by Tien and Hau rivers, Chau Doc is a large city bordering Cambodia. Chau Doc is the final destination of the mighty Mekong River filled with silt and abundant fish and shrimp. For that reason, the people here have taken advantage of this rich source of products to process a variety of seafood dishes, the most famous being fish sauce from snakehead fish sauce, gut fish sauce, anchovy sauce, Linh fish sauce, etc. who is infatuated if he is in love.

If tourists come to Tri Ton of An Giang to see the mysterious mountain scenery, Chau Doc is the place to immerse themselves in colorful cultural values. Besides the Kinh, Chau Doc is also home to the Chinese, Khmer, and Cham people. The Chinese paint this land the quiet, ancient color of the ancient temples and bring delicious knock-on noodles. The Khmer friends painted the colorful and bright yellow colors of the temples and made them addictive with their signature beef sauce. The Cham people with the pure white color of the mosque and ingenious processing of the dish toss the oven – the very own Cham Southern-style sausage. In addition to exploring tourism, Chau Doc also attracts visitors with an attractive form of spiritual tourism.

For those who are passionate about learning about culture and history, there is no place more attractive than Hue city. The ancient capital was located in the Central region when the Nguyen kings began to expand their territory. Hue city owns 5 heritages recognized by UNESCO as World Heritage, including Complex of Hue Monuments (1993), Hue Royal Court Music (2003), Nguyen Dynasty Woodblocks (2009), Nguyen Dynasty Chou Ban. (2014) and System of poetry on Hue royal architecture (2016).

Although ravaged by wars with the French and Americans in the 19th and 20th centuries, the city has preserved its enchanting mausoleums, temples, and palaces. Winding through the city is the romantic Perfume River, and looming majestically on the north bank of the Imperial Citadel of Hue. Dating from the early 19th century, this citadel stretches for three miles along the city’s waterfront. The Perfume River has a poetic and charming atmosphere, and the dragon boats are gracefully carrying the caverns.

If you have traveled to Lao Cai, you cannot ignore the “white plateau” of Bac Ha. Called “white plateau” because here four seasons clouds cover the mountains. Located at an altitude of 1,200 meters above sea level, the town is surrounded by closely spaced conical mountains. This quiet town comes alive on Sundays, when the time comes again, ethnic minorities such as Dao, H’Mong, Tay, Nung and Giay come to town for a market. Everything from textiles, bags to livestock products are made here. During the market day, artisans from the villages also come to entertain. 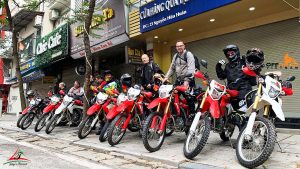 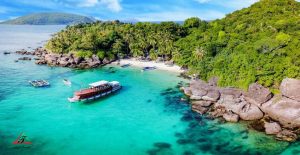 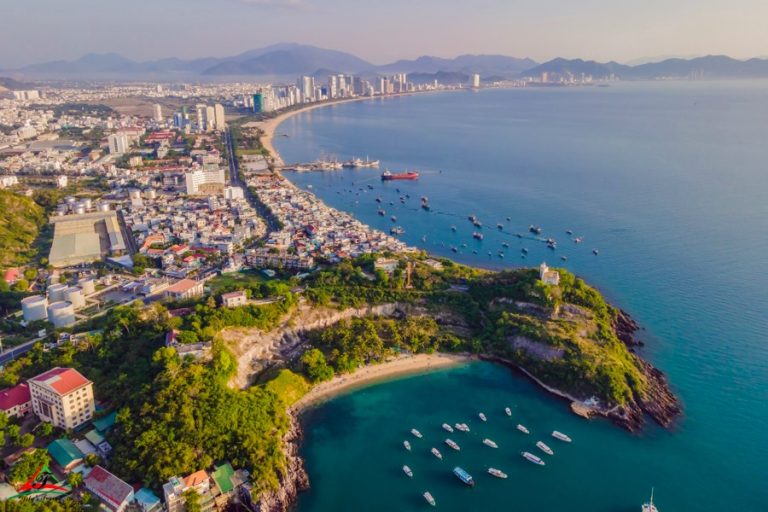